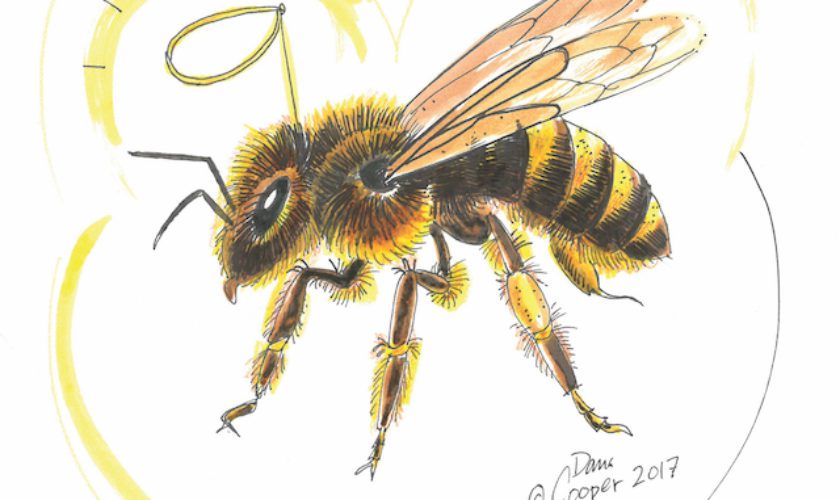 All Things Bright and Bee-utiful

So, what did you do in your summer holidays?

I rescued 217 bees. I was going to add “from a fate worse than death” but actually, no: just from death. Which seems bad enough, really; considering all the problems the poor things are facing these days.

I saved them in Britain. From my mother-in-law’s pool, where dozens ditched after their internal GPS’s went on the fritz (“Turn around where possible!”), and where they faced either drowning or poaching, given that the water temperature is now set at 30 degrees centigrade. Presumably so the elderly swimmers (I include myself here) can imagine that they are doing laps in their bathtub.

I’ve rescued them from my conservatory which, since an enormous spider took up residence in the rafters, has turned into Shelob’s Lair from the Lord of the Rings (“She’s always hungry!”). Not helped by the fact that we still have a Hurt No Living Thing rule in place in this house, which forbids the hoovering up even of ravenous eight-legged monsters.

Most of Shelob’s victims are beyond saving by the time I get to them. But I did manage to free one which, after ten minutes of surgery with a Q-tip and the turkey tweezers, was able to fly away home. The spider watched, trembling with rage, on her high wire.

I’ve been forced to hang a beaded curtain over the garden door. The “beads” look suspiciously like a load of old phalanges, and rattle in a creepy “dem bones, dem bones, dem dry bones” way every time anyone passes through them. But they do at least allow some breeze in, and keep some bees out.

I’ve been doing my bit in Bermuda, too. Plucking insects from the glassy surface of Harrington Sound when out kayaking, sliding the paddle under them like a spatula under a spinning fritter. Lifting them onto the nose of the boat; letting them dry out in the sun.

My father is an entomologist, who did his Master’s and PhD work on honeybees—although he has now sadly become allergic to their sting. Growing up in a house littered with specimens in pill phials, and flasks of fruit fly bait maturing in the fridge, meant I was never likely to be squeamish about bugs. But I wasn’t all that fussed, either.

A real life bee-in-the-bonnet episode, when I was writing a feature on a local beekeeper for the Gazette, did nothing to add to my ardour.

He (I can’t remember his name so I will just call him Mr. B. Keeper) was checking the hives. I was standing as far away as decently possible—hiding, in other words—scribbling in my notebook and watching him move ponderously through the clouds of smoke in his full get-up, like Neil Armstrong on the moon. One small step for man, one giant leap for bee kind.

Suddenly a lone worker, heading back to the hive, flew up under my protective headgear and got stuck in my hair.

I was hoping Mr. Keeper might have some helpful advice at this point. “Stay calm. Keep still. No sudden movements.” That kind of thing.

Unfortunately for both of us—and by us I mean me and the bee—it stung me. Painful in my case; fatal in hers.

It wasn’t really till I left home, and got a garden of my own, that my interest in bees began to become serious. It was the humble bumble wot did it.

I loved their happy pootering, the way they zigzagged from blossom to blossom. I loved the noise they made—a sort of contented droning. I loved the fact that they could achieve lift-off at all, given that they are built along the lines of a winged hippopotamus.

I started planting pollinator-friendly plants (selected, at the garden centre, on the basis of which pots were attracting the most bees).

Nemesias and salvias. Buddleias. All the “ias”! Scabious (such a horrid name for such a pretty plant). Lavender and cranesbill.

Plenty of purple—which is lucky, since that happens to be my favourite colour, too; as well as the bees’.

At one point we had a nest, under the roots of a rose bush. But my constant lifting of the dead leaves around it with a broom handle, so I could share my excitement with friends and family—”See! There it is!” as a dazed and grumpy queen crawled out of her hole in the ground (“What time do you call this?!”)—eventually drove them away.

After that, I thought about making a nest for them myself. According to the Gardener’s World website, it’s a doddle. All you need is an old flowerpot, a bit of slate, some chicken wire and a length of garden hose. Oh, and some dry bedding material. “Ideally an old mouse nest.” Wait. What was that last thing?

My mother, as ever, was left to provide the voice of reason: pointing out that as wonderful as it would be to establish an Airbnb for bumbles—an Airbnbee!—I might want to think about the less wondrous possibility of my father going into anaphylactic shock, should one of my guests happen to sting him.

And so I am left to admire them when they visit; and save as many as I can. International Bee Rescue. That’s me.