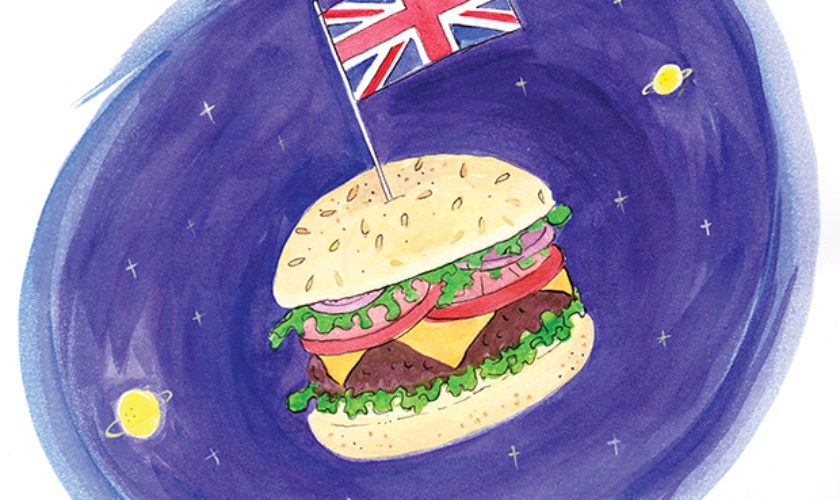 I remember the first time I ate a burger in Britain.

It was the summer of ‘69. America had just put a man on the moon, but in England, nobody had figured out how to put an edible beef patty on a bun.

We were on holiday and Mom and Dad took us to a Wimpy Bar—Britain’s answer to McDonald’s. The sort of answer that gets you a D and a “Must try harder” on your exam paper, as it turns out. The day was cold and grey—and so was the burger.

For someone raised on the offerings of Manny’s, the Paraquet and The Spot, redolent with bacon, cheese and Vitamin G (as my Uncle Skip used to call grease), it was a cruel shock, and I believe tears were shed (possibly by my parents, who soon realised they were going to have to shell out for a second lunch, somewhere else).

I told my daughter the story recently, and she laughed. “I don’t think Wimpy even exists anymore,” she said, reassuringly. But a few minutes later she e-mailed back to report that, incredibly, the franchise was still clinging to life.

“Apparently their motto is ‘The home of fresh cooked, nutritional meals,’” she said, disapprovingly. Not the catchiest slogan, but still better than “Home of the grey burger.”

Wimpy Bar aside, I am pleased to report that fast food—for grown-ups—has finally come of age in this country.

Last autumn, George Osborne was photographed tucking into a cheeseburger while making last-minute adjustments to the Budget Statement.

It was a Byron’s burger from London’s “posh” burger joint, as the newspapers pointed out. (The fact that both the Chancellor and his burger were posh was just too delicious for Fleet Street’s finest to resist.)

By “posh,” incidentally, they mean that Byron’s burgers are relatively expensive (ranging from £6.75 for a Classic to £9.25 for the house special), and Prince Harry ate there once.

In addition to being a bit pricey, Byron’s burgers are also a bit juicy, so respect to George for daring to tackle his over the Budget. (“Is that a £30 million cut to the Ministry of Defence? Or £3 million and a grease blob?”)

If you’re not as brave as George, you can eat in. The restaurants are licensed, which means you can wash your cheeseburger and iceberg wedge down with a glass of cabernet sauvignon or a frosty mug of craft beer.

And it’s not just burgers getting a makeover. Wahaca is a lively new chain specialising in Mexican street food. The fare—tortillas, tacos, empanadas—is imaginative, delicious and, by London standards, dirt cheap. Like Byron’s, they don’t take reservations—which is hard for old people like me, who get cranky when forced to stand in a doorway and watch others eat. The good news is that you can wait in the bar and distract yourself with a margarita until they buzz for you. By which time I’m usually buzzing, too.

Even the humble hot dog is having a moment, as my daughter might say.

A new place called Dirty Bones, clearly angling to be the Byron’s of the wiener world, has opened near my workplace.

They have a tiny menu—just six hot dogs—and a small but impressive bar list that includes a dirty martini made with “olive oil washed Tanqueray.”  What kind of genius thinks of pairing a hot dog with a dirty martini? I don’t know, but I’d like to shake that person’s hand.

To celebrate their launch, Dirty Bones gave away 700 hot dogs in an hour—699 of them to journalists working in my building.

It’s a little-known fact that, for suspicious people, hacks will eat absolutely anything, provided it’s free. A hot dog from a place you’ve never heard of? Bring it on. Two hundred yogurt pots left for six hours in a cardboard box at reception? Get the spoons! Experimental, peri-peri-chicken-flavoured potato chips from Nando’s? I’ll take six bags! Forget legislation—if anyone ever really wanted to muzzle the press, all they need do is leave a pile of toxic food on the doorstep. And wait.

My friend, who is the exception to this rule and vehemently opposed to street food in principle (she comes from Ghana where apparently they can be quite creative about what they are prepared to pop on a grill), was somehow persuaded to join the queue and brought a dog back for me to try. Notice: me. Not her. When, after five minutes, I was still alive, she had a bite, too. Delicious, we both agreed.

What all this means is that, for the first time in living memory, dinner for two in London is affordable. And fun.

So now I’m wondering: what next? A place specialising in curried mussel pies and Dark ‘n Stormies? Now that’s an idea…