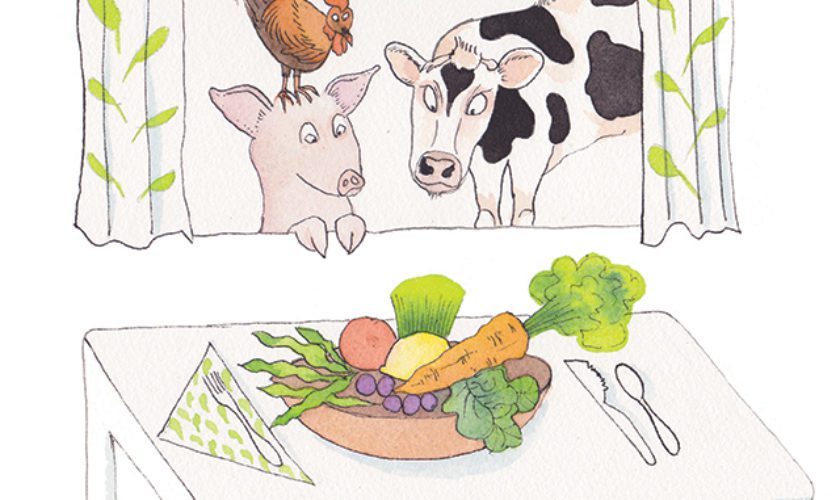 Give Peas a Chance

MY SON HAS GONE over to the dark side. The dark green, leafy side. Yes, he’s become a vegetarian.

He announced this momentous news on New Year’s Day—about ten minutes before we were due to tuck into a standing rib roast, and roughly six hours after my daughter started preparing the beef.

She was not amused.

I was alarmed, too—but mostly for selfish reasons. The Venn diagram that represents the Blackmores’ eating habits was already complicated enough: adding another category (Veggie!) to those existing overlapping rings (“Mad about Meat,” “Delicate Digestion,” “Will Eat Anything, To Keep the Peace”— and let’s not even bring the dog into the equation) would make planning an evening meal virtually impossible.

I could see a future as a short order cook looming (“Ding! Ding! Pick up for Table One. I’ve got a grilled cheese; a rib-eye, still mooing; a chilli con carne—easy on the chilli! And a large glass of house red and two diazepams for the gal at the griddle.”)

But then I got a grip on myself, and my next feeling was…relief. Relief that my son had not grown up in my time.

I honestly don’t think I knew a single vegetarian until I was 18. And I’m just guessing there, on the grounds that at least one of the beardies I worked alongside in the Biological Station lab must surely have been subsisting on mung beans and wheat grass. Or possibly just grass.

At home, though, our meals revolved around meat and poultry—Mom’s legendary pork chops with orange…hamburger stroganoff…lemon chicken on the barbecue. Who cared about the sides? It was the meat that mattered.

What would we have done, confronted with a vegetarian? Into my mind pops that scene in My Big Fat Greek Wedding where the auntie learns the shocking news about her niece’s intended: “What do you mean, he don’t eat no meat?” (Gasps and the sound of shattering crockery.) “That’s OK. That’s OK. I make lamb!”

Until quite recently, being veggie in the UK was no picnic either. I remember, soon after I moved to Brighton, accompanying some vegetarian friends of mine to a veggie cafe for supper. The plate glass window was covered in condensation, every man in the joint apart from my husband was wearing sandals with socks, and there was a choice of three dishes—all comprising (as far as I could detect) 99.9 percent pure lentil.

Since he’s not big on lentils, my son would have been looking at 20 years of Linda McCartney frozen sausages and Heinz baked beans.

How things have changed. These days, no restaurant worth its Maldon salt would fail to include at least one veggie option on its menu.

Good—and better than that, imaginative—vegetarian fare can be found just about everywhere. I went to a music festival in Suffolk recently (deep in the heart of pork country) and next to the hog roast stall spotted a blackboard sign bearing the words: “Guys, guys, guys! Halloumi fries!!!”

Well, how could I resist? My husband and I followed the arrow round to a stand where we were told by a redhead with a Brummie accent that there would be a ten-minute wait because “they’re so damn good!”

And they were: dusted in flour, salt and spices and flash-fried till crisp on the outside and soft in the middle.

“At last—something that makes REAL fries look like a low-fat alternative,” my friend quipped, while polishing off half my halloumi.

And at the risk of sounding like Donald Trump, some of my favourite restaurants are veggie.

There is Mildred’s, set in an eighteenth-century townhouse in Soho. Once you’ve managed to get in (no reservations are taken, so you have to mill about on the sidewalk, nursing your French 75 cocktail, nibbling nuts and checking out the
steady stream of beautiful people who look like walking advertisements for a meat-free lifestyle), you can dine on potato and pea samosas with mango chutney. Or lemon and ricotta tortelloni with saffron sauce. All while gazing out at London’s “chim chim cher-ee” skyline.

Even better is Terre a Terre, tucked away just off the seafront in Brighton’s Lanes. It specialises in the kind of veggie food that a seriously hungry carnivore might dream up (even my daughter is a fan of their steamed Peking buns).

There is vegetarian tapas. And rosti—imagine an extreme hash brown, topped with buttered spinach, cream, garlic, parsley and nutmeg…and a poached egg. And “scunchy chips,” sprinkled with smoky spices and served with a side of avocado lime hash.

And nary a lentil in sight.

By the time I’m finished, I’m finished. It’s enough to make you want to convert to the cause.