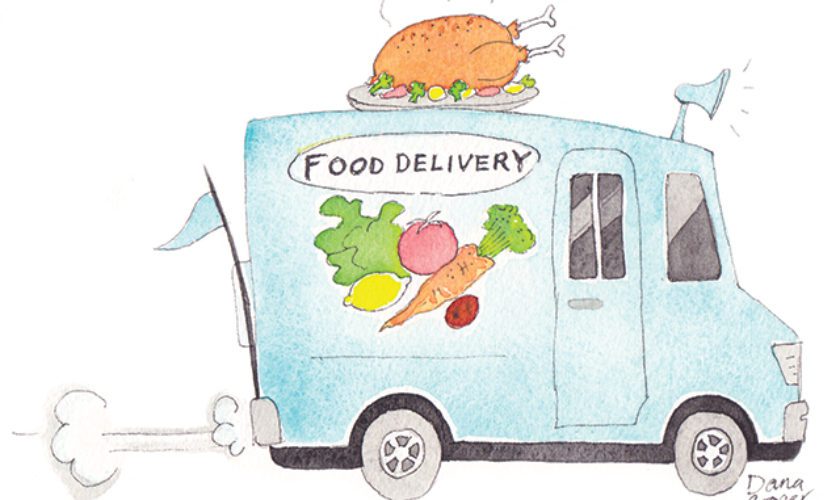 If you had told me 30 years ago that in the future my big shop would be delivered every Friday afternoon, between 5:30 p.m. and 6:30 p.m., by a man called Barnaby, driving something called “Cabbage Van,” I would have suspected you’d had a little “pop,” as my Uncle Jack would call it.

As my husband, who sometimes risks herniating himself to help Barnaby (or Andrew in Raspberry Van, or Jason in Lemon Van) lug my bags into the kitchen, pointed out, the rise of the grocery delivery service is possibly the single biggest change in our day-to-day lives since we got married.

Back then, we would go to the Supermart on a Saturday morning—along with half the rest of the Island—and then labour home, our Honda 90 so overloaded it looked like we were fleeing Phnom Penh rather than just restocking the larder.

The early years in the UK were not much different, except that instead of our trusty motorcycle I did the grocery run in the car. It still took the best part of three hours, but there was less risk that I would wipe out on the way home and spill a week’s worth of food and drink into the road.

By the late nineties, Sainsbury’s had set up an online service. Clearly designed by a man—I still recall spending an absolute age looking for avocados only to find them lurking with the Bartlett and Conference pears—the website was so tortuous it actually took more time to order my groceries than if I’d just given up, hopped in the Fiat and driven to the store.

Now, though, I can’t remember the last time I did a weekly shop in the car. Waste my Saturday afternoon circling for a space in the Tesco parking lot when I can just park myself at the kitchen table with a cup of tea and a Welsh cake, open the laptop, and let Barnaby do all the heavy lifting? No contest!

True, if I’ve run out of Welsh cakes, there’s not much that Ocado—the service I prefer because not only do they know that avocados belong with the salad stuff, they also offer a one-hour delivery slot, as opposed to the usual two—can do about it. Or at least not until Friday, when Cabbage Van sets off on its rounds.

There are other drawbacks, too. I’ve just had an e-mail, letting me know that in a fortnight’s time, I can book my Christmas order. It sounds very civilised, doesn’t it? But don’t be fooled. In Christmas week, “in order to manage incredibly high demand,” all the regular delivery slots are cancelled. Which means, come the morning of D-Day, thousands of frantic women (and it is still mostly women, alas) will be trying to bag one of the coveted December 23 or 24 spaces. Imagine trying to snare tickets to see Bruce Springsteen in concert. At the Robin Hood. And you’re nearly there.

In the past, the best I’ve been able to manage is December 21, and even that involves a fair amount of forethought. Will the lettuce be limp by the time Boxing Day—and the inevitable bleats for “just a little turkey sandwich”—rolls around? Will I really need six pounds of unsalted butter to see me through 12 days of Christmas? Perhaps not, but if I don’t stick it in my online basket now, it may sell out, and then I may have to make the brandy butter with…lard.

There are non-seasonal problems, too.

Somebody else packs your groceries, for one thing. And from what I’ve seen, that somebody did not have a mother who explained that dry goods go together, ditto chilled items, and that it is never acceptable to put the eggs at the bottom of a bag. (Mercifully, in this situation, you can just go online and get a refund; reason: “Other—rank stupidity.”)

Sometimes Barnaby, or Andrew, or Jason, is running late and positively twitching in his desire to make a quick getaway. So instead of a cheery “Where would you like them, missus?!” the doorbell goes and it’s like that scene from The Revenge of the Pink Panther… ”Special delivery—a bomb! Were you expecting one?”

Operator error can be a factor, too. Like the time I meant to order five avocados but wound up with 20, after failing to spot that they were sold in multi-packs. (I feel I should point out here that I do sometimes order things other than avocados, though clearly the Blackmore family have some soul searching to do, vis-avis recent news stories about the demise of Mexico’s pine forests.)

Then again, there are some foods I would never trust someone else to select (or perhaps just immediate family, and even then, only after a lengthy lecture). Like…meat. If I want a steak, I want to see the whites of its marbling with my own two eyes.

The general rule, with online shopping—as with life—is to ask yourself what’s the worst that could happen?

If the answer is that on Christmas Day you wind up with a turkey the size of a pigeon because you couldn’t figure out how the weight bit worked, don’t take that chance.