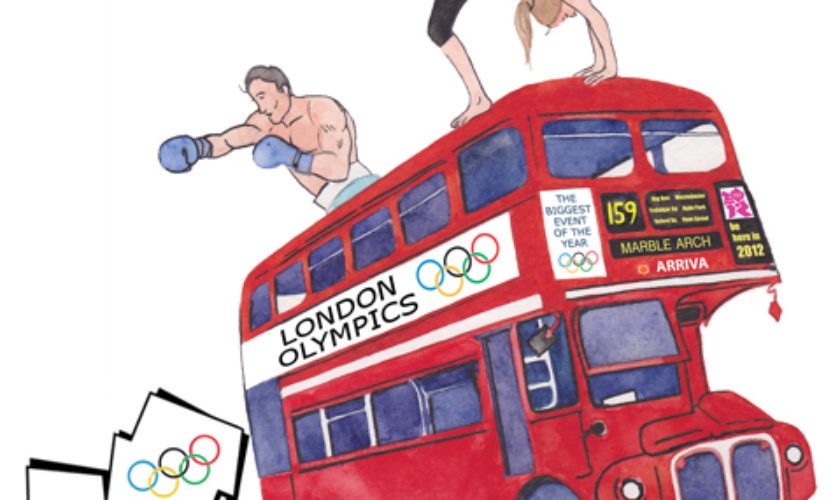 With less than 11 months to go till the start of the London Games, Olympics Fever is well and truly upon us. OK, so maybe at this stage it’s more of a low-grade temperature, but things are definitely heating up.

Already, the Olympics has nipped to the head of the list of No Go discussions at the dinner table. Mere mention of the ticket-selection process (more of this later) or the controversial logo (ditto) is enough to spark the kind of utensil-downing argument usually reserved for subjects like Ronald Reagan—How Will History Remember Him? and Chelsea’s latest managerial crisis.

Of course, we all agree that hosting the Olympics is a fine thing. And as my husband points out, rather too often for my liking, I will never see another one at such close quarters (unless I live to be 120, or St. George’s is picked to host the Games, neither of which I’m ruling out yet), so I may as well enjoy it.

And yes, there is plenty to cheer about. The sand for the beach-volleyball competition has been spread at Horse Guards Parade, and, through a happy twist of fate, the PM will be able to see the competitors from George Osborne’s upstairs window, if he leans out a long way and cranes his neck.

The press traipsed round the main site this week with Boris Johnson and Olympics supremo Sebastian Coe, and despite lots of grumbling early on about how the development would ruin an area of traditional beauty (it’s East London, people, not the Walsingham Nature Reserve!), everything looked marvellous. Even better, the main stadia were, barring installation of a few hi-tech gadgets, finished, so there appears to be no risk of an Athens situation, where Greek workers were still doing the wiring as the athletes laced up their spikes.

Londoners, who love nothing more than a bit of Blitz spirit (Keep Calm and Carry On!), are bracing themselves for the onslaught next summer. Lord Coe, chirpy as ever, has come up with a cunning two-pronged plan for how we are going to cope. Prong 1: MPs, who would normally rather be caught in a spanking scandal than on the Tube, will leave their cars and drivers behind and take the Underground. Prong 2: The rest of us, who already take the Underground because we have no choice, will take our running shoes instead, and hoof it. This, Lord Coe reasons, will ease the pressure on our overstretched public-transport system.

I, for one, am not averse to this idea, and faced with a choice between sharing my carriage for three weeks with a lot of blustering windbags swigging House of Commons seltzer and asking why the Circle Line no longer runs in a circle, or walking, I’ll choose walking every time.

Other potential trouble spots that might be trickier to sort out include the opening ceremony. “I keep thinking about that incident with the bus in Beijing,” my daughter said. Indeed, it is hard to forget the episode during the handing-over ceremony, when London’s Come To Us—We’re Fun! campaign, involving a double-decker bus, David Beckham and a particularly dishevelled Boris, backfired spectacularly, and a number of stars were trapped on board, clearly having no fun at all.

And then there is the matter of the 2012 logo itself. “I still feel ashamed, every time I look at it,” my daughter said sadly, as we examined the first photos of the medals, which, alas alack, feature the jumbled numerals prominently on the rear. For those who have not seen it, or perhaps seen it and not realised what they were looking at, the design features the numbers 2,0,1, and 2—and a weird blob—rearranged in a clump. My husband and others insist it is a work of towering genius. I think it looks like the work of an adman after a three-martooni lunch (I’d bet my bottom dollar the original was drawn on the back of a paper napkin in ballpoint), who is now laughing all the way to the bank.

We are also split on the matter of tickets. Like everyone else I know, in the initial lottery we wound up with exactly…none. Then, in the consolation round, we managed to snare a couple of seats for bantamweight boxing and a brace for the men’s handball. All we needed to complete the nightmare lineup were two tickets for the 50k race walk and a pair for the rhythmic gymnastics.

Every time I think of what lies in wait for us, I am reminded (and not in a good way) of an episode of 30 Rock where scheming CEO Jack tries to trick country bumpkin Kenneth into believing there is such a thing as Olympic tetherball. Synchronised running, anyone?

Yes, I know, it’s the Olympics. And yes, I know the whole world is invited. But we weren’t being greedy. We didn’t ask for the men’s 100m final. God forbid! A chance to see, oh, I don’t know, the dressage would have been quite nice. Maybe a few heats of women’s butterfly.

For us, though, it’s the handball—a sport invented by central European countries who are big on winter sports and rubbish on everything else—and a few rounds of weedy men knocking three bells out of each other (they’re amateurs—they don’t get to six bells till they turn pro).

But who knows? By next summer, I may learn to love even that.