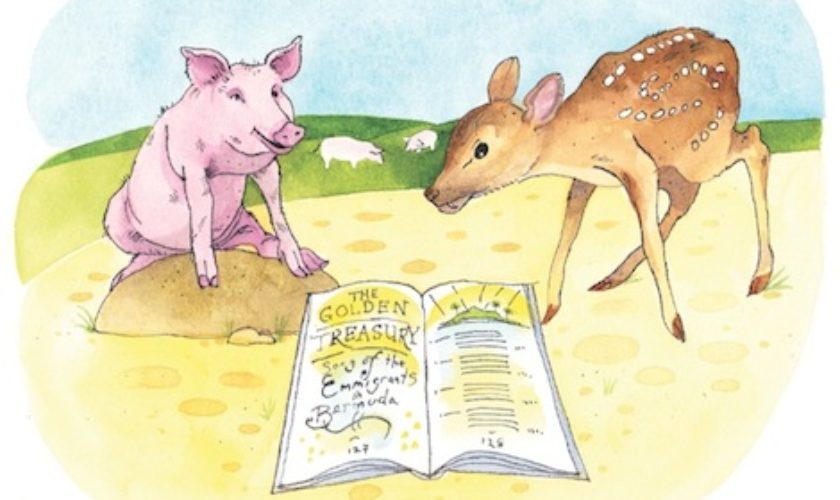 That’s Life! A Letter from London: Always on My Mind

Though I am far from home, I find, if I keep my eyes and ears open, there are glimpses and echoes of Bermuda to be found in the most surprising places.

A couple of months ago, I visited some friends who live in Suffolk. In a little village—hamlet, really—called Walberswick. It’s on the coast…keep driving, and you fall into the North Sea. The place can only be approached by one long, rutted road, flanked by free-range pigs and, after dark, patrolled by muntjac deer, who look like Bambi with an overbite but become extremely aggressive during rutting season (this from my friend, who has been on the receiving end of one of them…he’s a tall man…it was a low blow).

Deer victim and his wife run a pub called The Anchor. It’s the kind of establishment where, in autumn and winter and chilly spring evenings, there’s always a fire blazing in the snug. Where you can find whatever sort of beer you fancy—whether it’s brewed in Alloa or Alaska; where the wine is not out of a box; where the pub grub is not grubby.

We spent a happy weekend with them—walking miles along the vast lonely beaches strewn with pebbles smooth as eggs, avocets and sandpipers mirrored in the marshes behind us.

When it came time to leave, I noticed an old book by the side of my bed. Palgrave’s Golden Treasury, with an introduction by C. Day-Lewis. It was a slim volume, bound in red leather and slightly the worse for wear. I opened it, and it fell, at random, to page 127: “Song of the Emigrants in Bermuda” by A. Marvell.

Now this is remarkable for two reasons. One, for the sheer serendipity of it. And two, because I had never seen the poem before. Forty lines of verse that was beautiful and surprisingly accurate, given that it was written in 1653. Not for Marvell, a monster living in a tree, like Shakespeare’s Caliban in the “still-vex’d Bermoothes” (admittedly, the Bard was working with some very early information). No, this was a Bermuda I recognised…

With cedars chosen by His hand

From Lebanon He stores the land;

And makes the hollow seas that roar

Proclaim the ambergris on shore.

Andrew Marvell wrote the poem (also known as “Bermudas”) when he was 32, inspired, allegedly, by the tales of a man called John Oxenbridge, with whom he was staying while tutoring at Eton. Oxenbridge was an outspoken academic (an old boy of Cambridge and Oxford) who managed to get thrown out of every institution that ever employed him, thanks to his habit of speaking his mind. More interestingly than Oxenbridge’s chronic case of foot-in-mouth disease, though, was the fact that, by the time he was in his early 40s, he had visited Bermuda. Twice.

Imagine those journeys. No “frequent sailors” perks in the seventeenth century. It would have taken weeks—if he was lucky. And after the return leg (which must have made the BA red-eye to Gatwick look like the transporter from Star Trek), he went: “You know what? That was great! I think I’ll do it again.”

From Oxenbridge, Marvell no doubt learned of the “fowls” the islanders fed on. He knew of the treacherous “watery maze” of reefs that surrounded our shores.

Finding that poem felt like a sign. Possibly a sign that I had slept through more of my English literature lessons than I’d thought. But no! I asked my family, and they, too, were unaware of the piece. It wasn’t till I spoke to another friend that I found someone who did know it. “Oh yes, I think we studied it for O levels,” she said, blithely. I felt quite shattered. I wanted it to be my secret.

There have been other signs, too. Not quite as divine as stumbling on a previously undiscovered masterpiece by the man who wrote “To His Coy Mistress”—but signs all the same.

Taking my sister, brother-in-law and two small nephews to the Weald & Downland Open Air Museum in the Sussex countryside near Chichester recently, we came across a house built in…1609. In addition to that fateful date, Pendean farmhouse was significant for the fact that it boasted a central, indoor chimney. Until the mid-1500s, if you wanted a fire in your house, you lit one in the middle of the living-room floor. (Apart from the appeal of being able to get rid of the piles of Sunday papers without trudging to the recycle bin, there’s not much else to recommend this method of central heating.)

And while admiring H&M’s new home-ware collection, I noticed that one of their china ranges, decorated with a bold design of old newspaper small ads, featured, front and centre, the words: “Bermuda: Round trip including meals and berth, $50 and up.” I bet John Oxenbridge would have loved it.