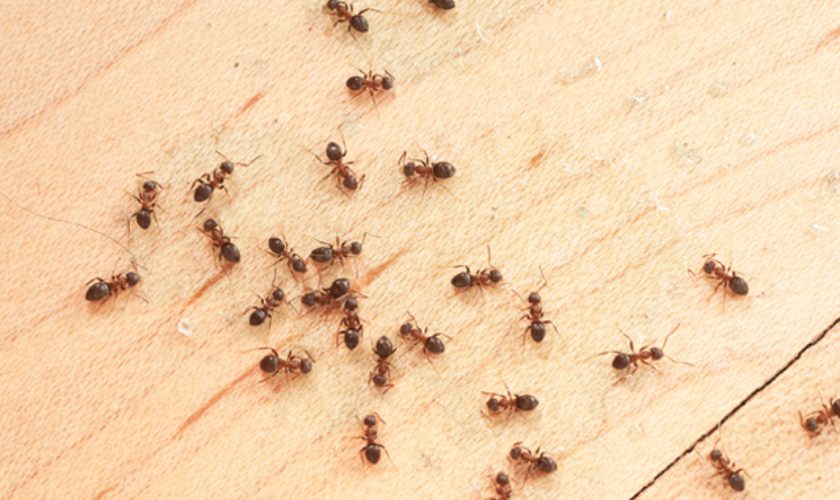 We were creeping home along the M25 the other afternoon, making idle chit chat about things that drive us crazy

Motorcycles that weave in and out of traffic at warp speed, trucks that overtake other trucks while going up a hill…it’s a long list, when my husband dropped a bombshell. “Oh, by the way, I think there’s a wasps’ nest in the conservatory.”

We had a wasps’ nest in the garden two years ago. It was the size of a small watermelon, buzzing with evil energy (and quite a lot of wasps, obviously), and it occupied most of a bay tree. The gardener who spotted it was so terrified he put down his chainsaw and refused to do any more trimming, and as a result the bay sported a quiff like Tintin for the rest of the summer.

I tried to imagine such a thing remaining unnoticed in the corner of a room—even one as messy as our conservatory—and failed.

“Oh, I mean an ants’ nest,” he said, a minute later, while I was still trying to digest this horrible news and wondering whether, if we drove along the hard shoulder, we could get back in time to save the cats.

Ah, ants! That explains it. This past week, the whole of Britain has been on red alert for Ant Day (or to give it its full name in our house, The Day Mom Loses Her Water Because Millions of Ants Come Crawling Out of the Woodwork).

Unlike Bermuda, where every day is like Ant Day (it’s like that old Smiths tune “Everyday Is Like Sunday,” but with more antennae), in the U.K., they have just one. Of course, nobody can tell when that day will be.

Last year it came early, brought on by a wet spring and a hot summer. Ants like that combo, apparently, and who can blame them?

This year, though, we had a spring that was dry as a bone followed by a monsoon. And so the ants, bored to tears like the rest of us, hung about for weeks on end, waiting for summer to arrive, and then they finally thought, to hell with this: let’s roll. We’re ants—how much time do we have?

Not long—unless you’re a queen. Did you know that an ant queen can live for 15 years? No, neither did I—not until Ant Day became an officially recognised national event instead of just another domestic disaster. Fifteen! In ant years, that’s 105,000.

After 24 hours of airborne debauchery, slumming it (and worse) with as many workers as possible, the queen goes to ground. Her wings drop off, and she lurks in her underground lair, in her dressing gown, with her hair in curlers, watching reruns of Desperate Housewives and laying eggs.

I first became aware of Ant Day soon after I moved to this country. I came home after work to find an army of them mustering on the patio. Naturally, as with all insect-related dramas, I rang my dad in Bermuda. “They’re crepuscular,” he said calmly.

“Not helping, Dad,” I replied.

“It means they come out at dusk.”

Once he explained that the plague would last only a few hours and would not be followed by frogs falling out of the sky or a rash of boils, I stopped fretting.

Anyway, compared to the Bermuda variety—ants so tough they can break into a closed refrigerator and march off with a whole chicken, plus trimmings—these lust-crazed British ants seemed almost pitiable.

But they’re still ants, and so over the years I’ve had to devise a way of keeping them at bay. Given that our family motto (imposed by me) is “Hurt no living thing,” it’s less of a final solution, more like a 24-hour stopgap: a combination of vinegar and chilli powder, applied liberally round door jambs and window frames. A Bermuda ant—which everyone knows can only be stopped in its tracks by a nuclear bomb—would just wrinkle its proboscis and march on by, but it works fine on the U.K. variety.

Yes, the conservatory smells like tacos for a week, but it seems a small price to pay.

One alarming footnote: not long after Ant Day, I was visiting my mother-in-law when I encountered a slug on her garden path.

Why, I wondered, are slugs so revolting? After all, they’re really just homeless snails. And yet, the shell (or lack thereof) changes everything.

A snail can be cute. Remember A.A. Milne’s poem “The Four Friends”? “James gave a huffle of a snail in danger, and nobody heard him at all.” Bless.

A workmate—a country girl—told me how she once trod on a whopper, barefoot, and carried on walking, thinking she had a plum stuck between her toes. I almost fainted.

I neatly side-stepped this mustard-coloured specimen, which was about three inches long. “Not as big as the one grandpa scraped off the side of the house with the trowel,” my son commented.

And then we saw another. And another.