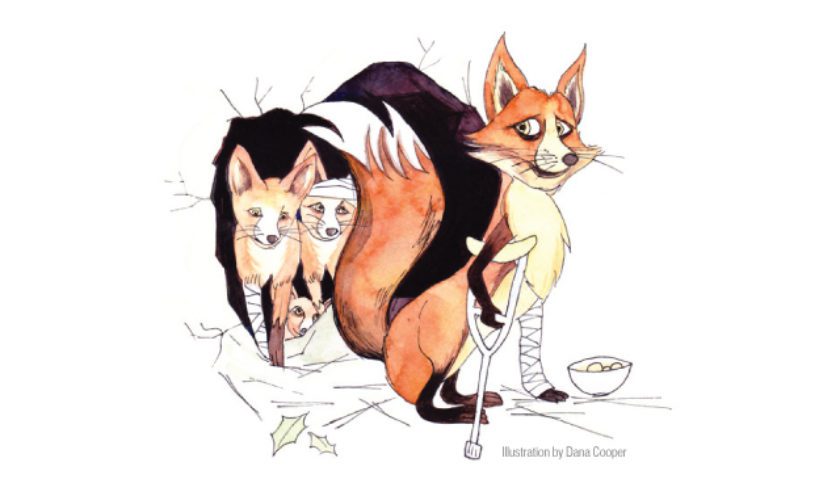 That's Life: A Letter from London: No Good Deed

Mottoes are funny things. Some are inspirational – like Who Dares, Wins; or my old alma mater Warwick Academy’s Quo non ascendam, “To what heights may I not ascend?” (Given my fear of heights, plenty; but I’m assuming it’s meant to be rhetorical.)

Others are whimsical, like Bermuda’s national motto, Quo fata ferunt, “Whither the fates shall carry us.” This has always struck me as a strangely passive, throw your hands in the air kind of motto. Oh well! The fates have carried me off to a life of crime/ dead end job/barstool at the Swizzle Inn, so what can I do about it? Yes, I know it’s about the wreck of the Sea Venture, but it’s not exactly Live Free or Die, is it? Or even Live Long and Prosper.

If I had to pick a motto for myself, I might go for “Stick It, Hywel!” – a pet saying of my Grandpa Hughes. (You have to imagine it being bellowed by a Welshman with a fine tenor voice, emphasising the “well”) When he was a schoolboy, Grandpa watched a race in which the hapless Hywel finished miles adrift. But his father never stopped cheering him on – “Stick it, Hywel!” – till he limped over the finish line, after everyone else had packed up their kit bags and headed home for tea. It’s about perseverance, and getting the job done, no matter how painful.

Hurt No Living Thing is another possibility, given my legendary soppiness with regard to animals of all shapes and sizes.

But gradually, I’m coming to the conclusion that it might have to be No Good Deed Goes Unpunished. Credited to Clare Boothe Luce (American diplomat, journalist and archenemy of Dorothy Parker), it seems to grow truer, the older I get.

Take the other day. I was out in the garden, doing a bit of tidying. The first flush of summer had passed, flowers had faded, and things were generally going to seed.

I’d spent a happy hour deadheading, when suddenly I felt a sting on the back of my hand. I assumed I’d been stabbed by a thorn, but when I looked down I saw a tiny insect. Still thinking the rose the culprit, I removed the creature and deposited it gently on a leaf.

Later, the bite began to swell. The next day, it was ten times the size of the bug that bit me, and oozing. And now I have a scar.

For exhibit two, m’lud, I present the foxes. This past winter, I noticed one in our yard. A big un. And he was limping. Then I saw another smaller. His mate. Also limping.

I rang my go-to guy, Roger, of Roger’s Wildlife Sanctuary – a modern day St. Francis, who devotes his life to caring for wild creatures injured when their lives collide, sometimes literally, with ours.

How badly were they limping, Roger wanted to know. Were they still hobbling around? Well, yes. In that case, best to leave them. “They will mend; they’re just looking for somewhere to lay low.” Wonderful. My garden: the vulpine version of Butch and Sundance’s Hole in the Wall.

“If you want to put a handful of kibble out at dusk, you could do that. Not too much- you don’t want them to become dependent. ‘

And so, for several weeks, I crept out as night was falling, and carefully placed a small fistful of cat food (“Royal Canin Pure Feline Beauty…with borage, for beautiful coats”) on an old flowerpot saucer in the back corner.
I could tell they were there – eau de fox is like no other smell on earth: it doesn’t just get up your nose; it punches you a new nostril.

Eventually, though, they must have recovered, for there were fewer sightings of their pointy, crafty faces, peering out of the undergrowth or round the barbecue.

But I did see something else that suggested they had not left entirely. An enormous hole. Dug under the hedge and halfway to China.

I filled it with compost.

The next day, it had been re-dug; deeper. So I filled it again, adding a bit of manure, just for good measure. The day after that, there were two holes.

And so it went. Until the hedge fell over.

Regular readers will recall that I launched a spirited defence of ivy in general, and my ivy hedge in particular, not long ago. “The holly’s humble cousin may not be a looker, but don’t judge a plant by its foliage!”

Well, shortly after I wrote that piece, the hedge flopped into our yard. Preserved and nurtured by me, it shot up so high that it turned into a giant vegetarian sail. So when the first big blow of winter came, it flapped back and forth, like a Chinese dragon in a wind tunnel, and then collapsed, taking a large section of fence, and a big chunk of plaster from the wall of our house, with it.