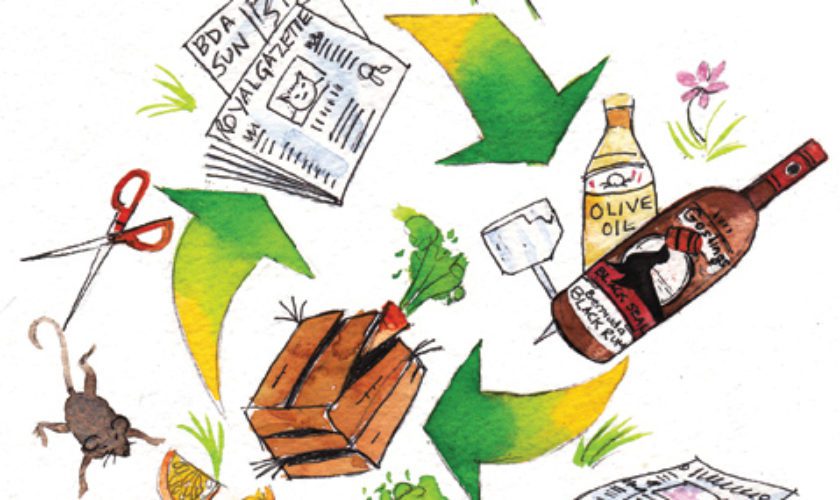 As I write this, I am at war. At war with the recycling men. Which is a shame, since I’m very keen on recycling.

It’s in my blood. My mother still recycles drinking water. Making her rounds in the morning, she tracks down half-empty glasses and decants the contents into her watering can. Once, my son left a Sea-Monkey, bought in the Aquarium gift shop, “growing” in a tumbler by his bed. Into the can it went, and by the time Mom came to water the roses, it had ballooned to the size of a Kraken.

In my kitchen, next to the sink, I have twin bins: one for green matter (vegetable peelings, teabags), the other for brown (Special K boxes, the inside of loo rolls). As soon as I detect a whiff of decay over the base note of eau de chats that usually permeates our house, I take the whole lot out to the big black compost bin in the garden. It looks like a Dalek that escaped from an episode of Doctor Who, but it’s excellent at exterminating rubbish.

Inside, there are a surprising number of worms and an even more surprising number of turnips. I got them (the turnips, not the worms) in an Organic Veg box from Waitrose, but nobody would eat them, and there they are, stubbornly refusing to biodegrade, three months on. It gives me a new appreciation for the constitution of the Russian peasant. Napoleon never stood a chance.

I recycle other things, too: shoes, old paperbacks. There are bins for everything in Brighton, even a pink one for cast-off brassieres. For items bigger than a bra, I travel to the household-waste recycling site, also known as the dump. Light years removed from the smouldering wasteland that cast a pall over the back of town when I was growing up, the local dump is (sad, but true) one of my favourite places to visit, teeming with happy, helpful people, bound together by a common purpose.

No, it’s not the rubbish I dispose of myself that’s the problem. It’s the rubbish I leave for the men in DayGlo vests: those items deemed even more indestructible than organic turnips and old bras. Wine bottles and batteries. Tin cans and copies of The Daily Mail. These I put into a pair of standard-issue black boxes at the front of the house, obeying the rules for recycling drawn up by Brighton & Hove City Council, the main ones being: 1. On collection day, your rubbish must be on the public pavement. Not on your property. “It has to be on the bit where anyone can walk, but not where it can obstruct anyone who is walking,” said a woman from the council’s recycling team helpfully. Right. And,

2. Thou shalt not mingle. Glass and batteries must be kept away from paper, plastic and tin. Why? Who knows. Perhaps they might get involved in a low-rent version of Rock, Paper, Scissors: Beer Bottle, Pizza Box, Baked Bean Can.

The “M” word is invoked every time I ring up to inquire why, after three weeks and counting, my rubbish is still languishing on my doorstep. “You haven’t mingled your recycling, have you?” they ask, in an accusing voice. “Yes, actually, and I’ve hidden a bit of weapons-grade plutonium inside a Snack-a-Jack wrapper and tucked that in there, too,” I long to reply.

Naturally, your garbage has to be clean. Bottles and cans must be washed. (Do you know how difficult it is to rinse out an olive-oil bottle? Those little spouts are hell!)

If you do all of the above, the recycling men should rumble up in their big green truck every Wednesday morning and take your pristine trash away.

Except, they don’t. And now I am locked in a deadly stalemate that has left my front walk resembling a shantytown…a shantytown inhabited by dipsomaniacs.

Days pass. The wind freshens, causing whole sections of the Mail to blow across the road, terrifying pedestrians with headlines like Never Mind Booze—You Can Get Liver Disease from Biscuits! and Why Dieting Makes You Fat. When I ring to report this latest outrage to the team, I finally get some action. “We can certainly do something about that!” a nice young man tells me.

This morning, I asked my husband to check the boxes again. “Still bulging,” was his reply. But tucked behind them, he found three waterlogged envelopes. Inside each was a pair of what appeared to be giant hairnets. On closer inspection, I could see they were mesh covers for my boxes. I tried to stretch them over the top, but it was hopeless, like attempting to contain Bob Marley’s dreads in a snood crocheted for Whistler’s mother. Urge to mingle rising…