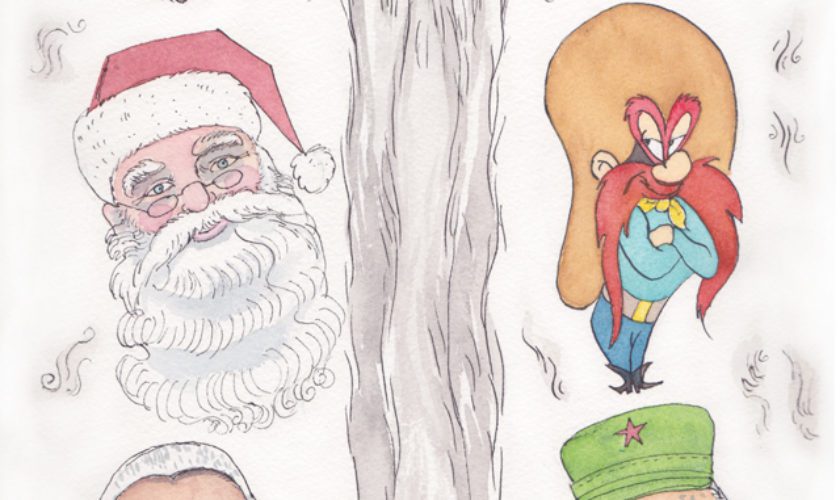 Beards are big at the moment in the UK. I don’t mean big and bushy (although certainly some of them are). I mean big news.

When I first started work in London, they were banned in our office. Not officially, of course—that would have been illegal. But it was widely suspected that the editor detested facial hair. So as a result, there was just one beardie in the building: the “father” of our NUJ (National Union of Journalists) chapel, who, thanks to his position, felt fairly safe from persecution.

Now, though, they are everywhere. I blame Jeremy Corbyn. The Labour leader sports a classic left-wing beard (like my old NUJ colleague, and Fidel Castro). Ottiwell Simmons had a neater variation of The Comrade, as I like to call it, although unlike Mr Corbyn’s, I never worried that Ottie’s might be concealing the remains of lunch. Last week’s lunch.

At the other end of the spectrum—and coincidentally also hitting the headlines—are hipsters: metrosexuals who favour the kind of manicured facial hair last seen when the Romanovs ruled Russia.

The hipster’s natural habitat is London’s East End, and their influx has caused some problems with the original, working class population, unhappy about what they see as “gentrification” of the area.

This autumn, they attacked a hipster-run breakfast bar in Brick Lane, enraged by the fact it was offering imported cereal for £5 a bowl. Protesters smeared economy cornflakes over the windows of The Cereal Killer Cafe (that’ll teach ’em) as terrified customers cowered inside with their Lucky Charms.

I saw a picture of the cafe’s owner with the caption “Alan Keery, complete with hipster beard,” as though, somehow, his facial hair had been the final straw. Well that’s it: he sells overpriced cereal—and he has a beard like Tsar Nicholas II. Let’s get him.
Flyers found at the scene had anti-hipster messages, like “We don’t want your pop-up gin bars and brioche buns—we want community!”

What?! I don’t have a hipster beard—I hope!—(my vision is failing so it’s possible I do and people have simply been too polite to mention it), but my dream is to have a gin bar—even better, a gin bar that sells brioche—pop up next door.

Anyway, I digress. Beards! Unlike moustaches—which my Aunt Carol always insisted were grown by those with something to hide (I think she meant crimes, not unattractive upper lips), and which appear like mushrooms in the autumn only to be shorn off in “Movember”—beards seem to be here to stay. Sure, there are still the seasonal ones, facial slankets worn in winter and then slipped off in the spring. (Stephen King apparently puts his razor down at the end of baseball season, and doesn’t reach for it again until the first day of spring training.) But it’s now perfectly acceptable to sport a beard, all year round.

So in honour of this new wave of hairy dudes, I’ve come up with a list of a few of my favourite beards…and some I’m not so keen on.

1.    David Wingate. Try to picture our number-one naturalist clean shaven. Can’t do it, can you? Far too busy thrashing through the undergrowth saving species to worry about shaving. He could fashion a straight razor out of a bit of dead cedar and some barnacles and tidy that baby up if he wanted to. But he doesn’t.
2.    Santa Claus. A trustworthy beard that compels you to spill your secrets into its snowy depths. (How do you think he knows if you’ve been good or bad, people?)
3.    Yosemite Sam. More of an overgrown ’tache, really, that knots under the tiny varmint’s chin like one of my mother’s rain hats. Still makes my list, though, because it’s hilariously ginger, and so very angry.
4.    The Old Spice Man. The man your man could look like if another, very skilful, man (let’s call him a barber) trimmed his beard every day and his voice dropped three octaves, and, oh well.
5.    ZZ Top. Billy Gibbons or Dusty Hill—not Frank Beard the drummer who, despite his name, does not have one. (Does anyone but me find this funny? No? Oh come on!). Gibbons and Hill, on the other hand, are 99 per cent hair. What Cousin Itt from the Addams Family would look like if he suddenly remembered he had legs and stood up.

Bad beards…
●    Any beard worn sans mustache. People will assume you are an Anabaptist and, with apologies to my Mennonite and Amish readers, that’s a tough look to carry off. (Not even Harrison Ford in Witness felt up to the challenge.) If they are kind, they will assume your electric razor broke halfway through your shave and you are making the best of a bad situation.
●    Big beards worn by men with bald heads. Just ludicrous. Take a picture, turn it upside down—and see what I mean?