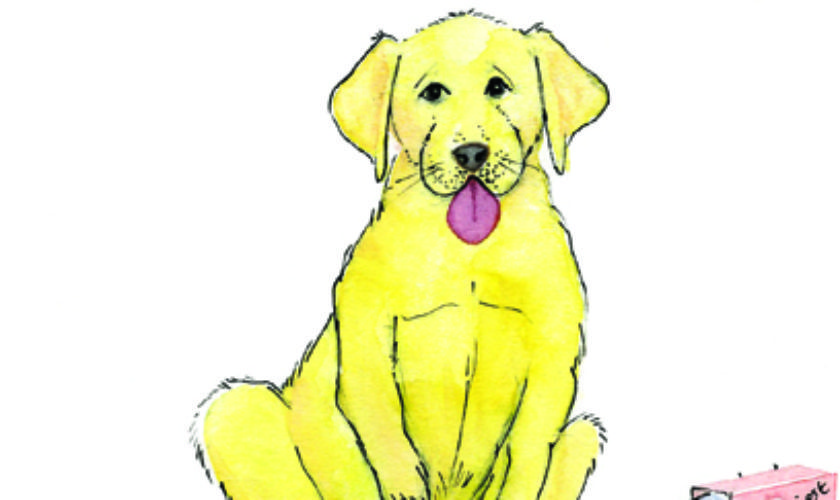 Dear ladies and gentlemen: I regret to inform you that there will be no column today because the dog ate my homework.

I had written a lovely piece about the impending general election and the odds of my surviving till then, given that every time I hear Ed Miliband, see Nigel Farage, or read about David Cameron’s latest footwear faux pas, my eye starts to twitch and that vein in my forehead begins to bulge.

But then, the puppy destroyed it. He looked at me with those big, black eyes—a few grains of cat litter clinging to his big, black nose—looking like butter wouldn’t melt in his mouth, which it probably wouldn’t since, I daresay, it would get all caught up in the cat litter sticking to his soft palate. (Now there’s a disgusting habit we must cure him of, immediately.)  And I knew it was gone.

It’s not the only inappropriate thing he’s ingested recently.

There was that baguette, quickly followed by four blueberry bagels from what he now clearly sees as the “carbs corner” of our kitchen.

A day of dosing him with Miralax sorted out that little problem. But the column? No, I’m afraid the column is well and truly lost.

You will have gathered from the above loony ramblings that our family has expanded.  Clearly, at some level, I felt my life was not exciting enough with just two crazy cats, two kids and one long-suffering husband to care for.  And so, in August, I acquired Oliver, a golden retriever/Beelzebub cross.

My daughter picked the name, because she wanted something with three syllables that sounded posh, and we’d all rejected her first suggestion: Percival.

His name seems appropriate enough now, though, because like the Dickens character, Oliver always wants more. More treats. More attention. More of the time I would normally devote to important things like washing my hair or writing my column.

Our last dog, Alice, bless her soul, died five years ago. She was 15. Which makes it—hold the applause—20 years since I last had a puppy.

And in 20 years, I had forgotten a lot. Such as how exhausting they are.

However, the bottom line is that a pup is like a newborn. Only, a newborn who can run around your house creating havoc—and much nastier stuff—here, there and everywhere.

They wake you up in the middle of the night, crying like babies. Because…they’re babies.

For the first two months of Oliver’s occupation, I was like a zombie. Sleeping five hours a night if I was lucky, scavenging for skips because I was too busy fixing Oliver’s food to sort out my own. (The diet sheet from the breeder specified four meals a day, starting with warm puppy formula and Weetabix, and culminating in a late-night snack of two “sweet biscuits”—preferably digestives or rich tea.)

And washing? Well, frankly, who had the time? Thank God that my husband was spending so much time at the office…or wait…were those two things, perhaps, related?

I was so exhausted that I considered sending Ollie to live with my parents. Just until he was a bit bigger and better behaved. So, three years max. Their German shepherd, Mya, a dog of rare beauty and intelligence, died suddenly this spring, leaving a vacancy at the old doghouse overlooking Harrington Sound. But then sanity prevailed. They need a new dog—something grown up and gentle. Not a heart attack on four legs.

Life improved, marginally, after I took Oliver to the vet and showed him the diet sheet from hell. “Oh no, no, no!” he cried, aghast.  “I do not like the sound of two digestives before bedtime.”

I didn’t like the sound of it either: “Crunch, crunch, bark, bark, bark…”

“And,” he added, “scrambled egg with cheese at lunch is all very well and good, but we really want to be getting him onto a diet that’s easy for you. What happens if you’re not near a stove and a frying pan?”

I tried to conceive of such a calamitous situation and failed because the other thing that Oliver has eaten is—my brain.

Still, life is on the up. You’ll be pleased to hear that Oliver is now on a digestive-free diet, and instead gets three “sleepy time” dog biscuits before bed—thrice the recommended amount, but who’s counting—crammed full of every soporific herb imaginable, to knock him for a loop.

With both of us getting a bit more sleep, I’m sure it’s only a matter of time before some of my little grey cells regenerate and I am able to resume normal service, and write about something other than my pet.