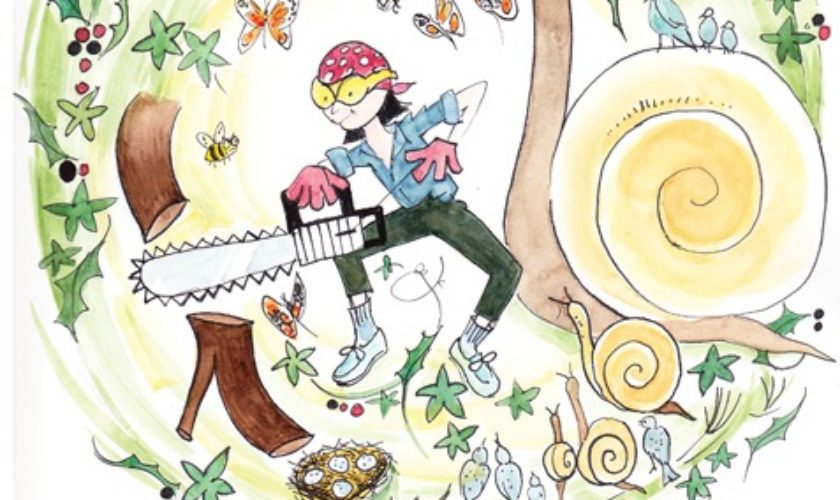 That's Life! A Letter from London: Ivy, In a League of It's Own

“The holly and the ivy,
When they are both full grown,
Of all the trees that are in the wood,
The holly bears the crown.”

Which is all very jolly for the holly – but what about the poor old ivy? It’s true: it doesn’t bear a berry, as red as any blood. Its berries are black – as black as any blueberry that’s rolled to the back of the crisper drawer in the fridge and lain there undetected for two months (which is an awkward line for a carol, I grant you; not to mention enough information to have my kitchen closed down by the Department of Environmental Health, pronto).

It’s common, the ivy – but I’m here to sing its praises, all the same. Because the humble, uncrowned ivy is a good example of how it’s possible to misjudge something, spectacularly.

When we moved into our first house, we had a garden. A small one – patio with delusions of grandeur, really. One side was flanked by an ivy hedge. Not a cosmopolitan, variegated ivy, but the homely old English kind that grows like Topsy.

Soon, we noticed that our garden, minuscule as it was, was host to an enormous number of snails. There were plenty of clues. Every time I planted something tasty (tasty to a snail…so marigolds, or dahlias, or ornamental cabbages) it would disappear, nibbled down to the stalk, which, to add insult to injury, was always left sticking out of the dirt like a used toothpick.

Where were they coming from? The slime trail of suspicion led straight to the ivy hedge.

And so I cut it down.

I rented a chainsaw. And like Rosie the Riveter, with a kerchief on my head and goggles clamped over my eyes, I attacked it. It took a whole weekend to kill – the force was strong with that hedge. When I finally hacked my way through to the mother trunk, it was like something out of a horror story: huge and bristling with hairs. As big around as my thigh (and there the resemblance ends).

I was thrilled to bits with my efforts at the time. Now, writing this a dozen years down the road, it makes me want to weep.

Yes, I destroyed the snail’s secret lair – but I destroyed so much more. That ivy was probably 50 years old. Gone in a matter of hours. Because it wasn’t beautiful, because it didn’t have a blossom “as white as lily flower,” I assumed it was worthless.

When we moved into our new house, I saw to my annoyance that we’d inherited another ivy hedge. Twice as long as the old one. Getting rid of this baby was clearly going to take more than a weekend, I thought grimly; and I might need help.

And so I left it. And watched it. From the study window I could see sparrows – like Bob Marley’s three little birds – clinging to the swaying fronds on top like sailors in the rigging in a stiff breeze. Meanwhile, down in the depths, the women and children went about their business. I couldn’t see them, but I could hear them, rustling through the secret passage, chirping so loudly people in the street would pause and cock an ear.

Gradually, I stopped thinking of the hedge as a snail-infested eyesore, and began to view it as a hotel for all the small things. Like the Fairmont Southampton, with fewer celebs and more songbirds.

The more I looked at the ivy, the more I saw. I noticed nests – not just sparrows’, but blackbirds”. I realised that the ivy was an ecosystem, as rich as the sargasso clumps that drift around our island – and just as deceptive. The seaweed looks, to the casual observer, like a load of stringy, brown smelly stuff. But inside is another world: tiny crabs and shrimp and fish, protected from the wilds of the open ocean by the intertwining strands.

My ivy, I realised, was like that: a haven. Food and shelter, all in one unprepossessing package. In the autumn, the flowers – looking like anemic broccoli florets – would appear.

Butterflies would flock to them, and the last of the bumblebees. Beauty is in the eye of the beholder, truly; and to the Red Admiral and his Painted Lady, the ivy was lovely indeed.

In the winter, when all other food sources had shrivelled up, those plain, plump black berries remained. Starlings tossed them up and swallowed them, like show-off drunks, bellied up to the bar at the Swizzle, chugging peanuts.

One clear and frosty day, we saw a fox, sunning himself on the top (the roof terrace, as I like to think of it). Six feet below him, the birds were safe and warm, protected from the fantastic Mr. Fox and the weather, too, by the intricately interwoven vines of ages.

So you can take your prickly holly, so-called king of the wood. Only leave me the other one.