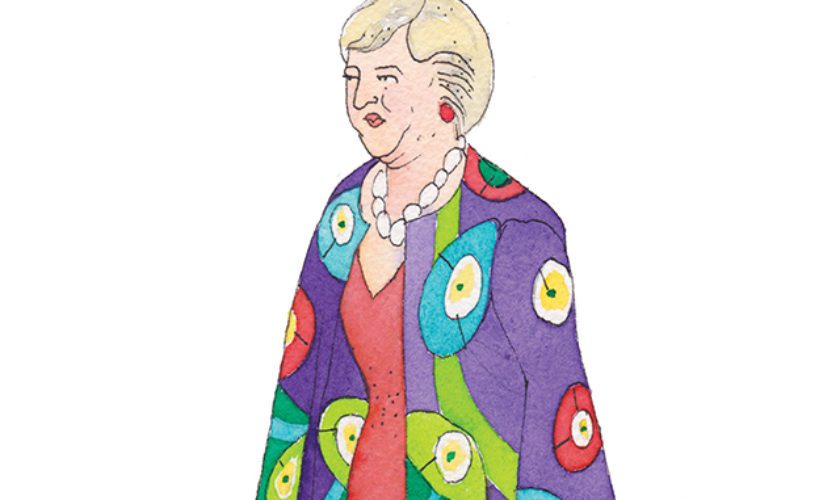 Rarely do I talk politics in this column (apart from the family kind, obviously). I may feel like having a rant about something, or someone, in January, when I’m flailing about for ideas. But will it (or they) still be exercising me—or more importantly, anyone else—by March, when the magazine finally hits the newsstands? Unlikely.

However, I thought I might risk it, just this once.

Don’t panic! I am not going to “Bre-moan” about Brexit. Or discuss The Donald. No: I thought I would tackle another political phenomenon which has divided Great Britain: Theresa’s trousers.

Assuming Mrs. May is still in office by the time spring rolls around, I reckon people will still be arguing about her taste in fashion. Barroom brawls erupting between those who think the Vivienne Westwood blue-checked pantsuit she donned to deliver her “What I Mean by Brexit Means Brexit” speech (her “go-to outfit,” apparently) was a bold statement of intent, and those who think she should give it back to Rupert Bear, at once.

It was, I have to admit, an improvement on the ensemble she wore in Birmingham a few weeks earlier: black cropped trousers and black top cinched with an enormous hi-vis yellow belt and teamed with a pair of black velvet ballet pumps with steel toe caps.

Some papers described it as “fashion forward,” but to my mind she looked like Rosa Klebb on lollipop lady duty.

Some will say I am being childish for even raising such a frivolous matter. But frankly, given that frivolous matters are all I can bear to discuss at the moment—because the big things are way too depressing—let’s roll with this. And besides: she started it. With those leather trousers…

So, late last year, the PM gave a “relaxed” interview with the Sunday Times, at her home. Leaning back on a sofa, one arm resting over the back (like a teenage boy waiting to make a move in the cinema), and the kind of smile playing over her lips that was no doubt meant to say: “See? I’m not that scary” but in fact said: “Hughes. My office, after school. Detention!”

However, it was Theresa’s trousers wot really split the nation. They were leather. And cost £995.

Nicky Morgan (former secretary of state for education and now rumoured to be in line for a plum job in Hull) made the mistake of publicly commenting on the trews. She had never, she said, spent that much on a single item of clothing, apart from her wedding dress. “My barometer is always: ‘How am I going to explain this in Loughborough market?’” she carried on. Hole. Digging.

Colleagues rushed to defend the PM and her pants. Some said it was sexist of Ms Morgan (who could never be accused of being a dedicated follower of fashion) to criticise a fellow woman MP simply for her dress sense, or lack thereof.

“Trousergate” gained more legs when it emerged that Mrs. May’s top aide had sent a memo banning Morgan (aka “that woman”) from Number 10, after her remarks.

Come, come! Time to grow a hide, Theresa. In addition to the thousand pound “bitter chocolate” one you’re already sporting on your rear end, that is.

Every prime minister in recent memory has had to endure abuse about their clothes: David Cameron’s Achilles’ heel was shoes. Six years ago the press went gaga when some eagle-eyed snapper spotted, during the ritual start-of-summer-hols photo call, that our “chillaxed” PM was still wearing his black work shoes, albeit sans socks. Dave, Dave, Dave…they can see ALL of you, love, even the bits under the table.

And speaking of “under,” with John Major, it was pants of the under variety that became overexposed, after his lover Edwina Curry (let’s just savour that again…Edwina Curry and John Major…nope, never gets old) revealed the grey man of politics actually favoured blue undies and not tighty whities, as the whole country had assumed. Cue pant-demonium.

Gordon Brown was slightly different, in that fashion commentary was largely restricted to trying to identify which foodstuffs had fallen onto his tie on any given day. And the press was too terrified of Mrs. T— with her pussy-bow blouses, adding a “hint of softness” (as if !), and bulletproof hair—to say anything unflattering lest she wallop them with her handbag (which I like to think contained just a small can of Elnett and ten pounds of lead shot, to add heft).

She got it right, as usual. Rise above it. It’s hard to imagine Dame Jennifer Smith giving a tinkly toot, as my mother might say, about what some hack at The Royal Gazette thought of the outfit she wore to the Peppercorn Ceremony.

But Mrs. May does care. Long before she was PM, her surprisingly saucy taste in footwear (leopard print kitten heels!) made her a favourite with photographers at the Tory Party Conference, an event so boring I suspect the invite says Dress Code: Dull.

But anyone who courts attention with her Russell & Bromley “Vivacious” court shoes (Bordeaux patent leather, velvet bow, glitter heel, £175) cannot cry foul when attention shifts to other elements of her wardrobe. Especially when she has just agreed to do a spread in April’s issue of Vogue. “Well, that really shows the world she means business,” a friend commented. Rupert Bear had better lock up his wardrobe.