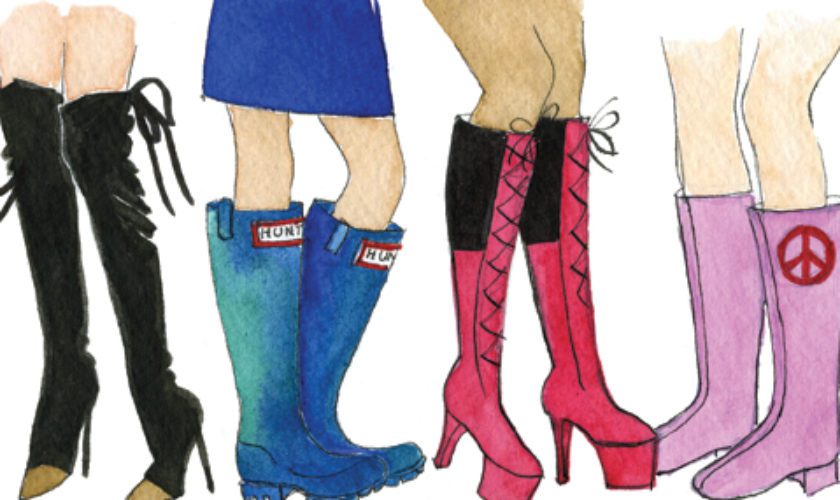 That’s Life! A Letter from London: These Boots Were Made for Walking

London in winter is a city of boots. As I trudge up the steps from the Tube each morning, I reckon that 90 percent of the women around me are wearing them: sturdy boots and kinky boots, patent boots and furry boots.

And let’s not forget the ubiquitous Uggs. I had some myself until a friend, married to an Australian, told me that our obsession with Uggs is a source of much mirth Down Under (where the fur-lined footwear is manufactured). It seems they’re really house shoes—who knew?—so the sight of a load of Northern Hemisphere numpties strutting up and down the High Street in them is as hilarious as if we all suddenly decided to go shopping in our slippers.

But let’s ignore those sneering Aussies. I love the fact that Britain goes boot crazy for five months of the year. I’m boot crazy myself. One of the first songs I remember listening to on the radio was Nancy Sinatra’s “These Boots Are Made for Walking” (“Are you ready boots? Start walking!”). And when I was six, I got a pair of white go-go boots (with tassels) for Christmas: still possibly the best present ever.

In Bermuda, boots stay in the corner of the cupboard for months on end, and when you do pull them out you find the damned things are covered in mildew. And let’s face it: even a bitter Bermuda winter requires little more than a pair of socks with your Top-Siders. But the nature of the British winter—rain, rain and more rain, punctuated by the occasional blizzard—makes boots essential.

I could not live without my Hunter wellies. The black pair, that is, not the pale pink ones, which I have not worn since my father pointed out that they resembled a couple of prosthetic limbs that someone had left in the hall. My relationship with other knee-length boots is trickier, mainly because of (whisper it) my disproportionately large calves. No wonder I loved those go-gos. Nor is it good news for the fuller-calved that there seems to be a trend this season toward wearing boots over the top of trousers; it’s bad enough having to suck in your lower leg, so to speak, but adding fabric to the equation could making zipping up mission impossible.

Of course, some people (I’m thinking ghillies) have always affected this look. But not, usually, in London. They tend to be in Scotland, clubbing some poor defenceless bird to death, often with Prince Philip in tow. In the Big Smoke, boots are worn with skirts and dresses; with tights; sometimes “ironically” (as my daughter explained to me) teamed with chunky socks; very occasionally with shorts; or under trousers. Under, mind you, not over.

But on a recent visit to Cheltenham (which is not London, I know, but not Scotland either) I noticed a lot of women—chic women—wearing their boots the wrong way round. I looked to see if Prince Philip was lurking nearby, a brace of pheasants slung over his shoulder, but no. These ladies had clearly come to shop, not to shoot. I was confused. My daughter had always told me that boots over jeans was a no-no. What was occurring? I rang her for guidance.

There was a longish pause, and then she said, “Well, you are in Gloucestershire.” What I was seeing, she explained, was the Kate Middleton effect. And it’s true: Cheltenham was positively teeming with Duchess of Cambridge clones, rangy girls with infuriatingly good hair striding about like Puss in Boots. The upshot of all this is that I now have to buy a new pair of skinny jeans, to replace the ones that were sucked into my son’s vast jean pool in a recent laundry mix-up and have not been seen since.

Over the weekend, I spent a predictably miserable half hour in Gap. There were no drainpipes, only jeggings, which I object to on the basis of their extremely stupid name and the fact that they appear to have a gusset on the outside. Also, who can fit into these things? Jeggings, for those who’ve not had the pleasure, are like oversized flight socks—you may never have to worry about a DVT, but you will also have to cut them off with a pair of nail scissors after the first wear.

And what about boots? Will I need a new pair to keep up with the Cambridges?

“Oh, yes, because you have so few,” my husband said, unsympathetically. “What about those cowboy boots I bought you in the spring?”

He had a point. I did have a perfectly good pair that Calamity Jane herself might have coveted: embroidered, but not too racy, and back cut, for the curvy calved.

So I rang the oracle. “What about my new cowboy boots? Can I wear them over my jeans?”