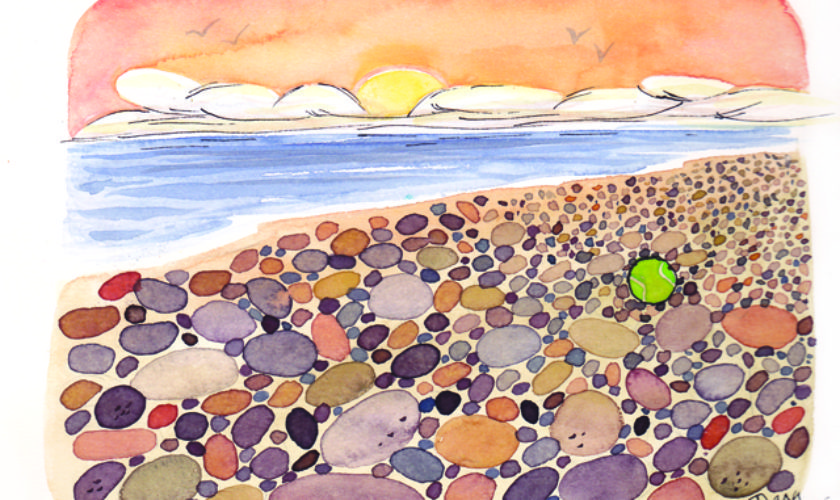 “I must go down to the seas again, to the lonely sea and the sky.”

And just think: back in 1902, when John Masefield wrote those words, all he needed was a tall ship and a star to steer her by when he hit the beach.

Not for him the shoulder-dislocating giant tote stuffed with poo bags, tennis balls and chucker, a frisbee, chopped liver (literally), and The Skunk Of Last Resort, a squeaky toy only to be used in the most dire emergency, to retrieve the retriever with zero recall.

With apologies to the former poet laureate, I have been spending a lot of time down the “gull’s way” of late, walking the dog.

He loves it, because there are always marvellous, magical things just waiting to be discovered. Such as, whelk egg cases: spongy, white, round, light as a feather—nature’s Nerf balls. Or cuttlefish (they used to clip them onto the sides of budgerigars’s cages) washed up from the deep and delectably crunchy, if you have really big teeth, Grandma. Or foam, whipped by the wild waves, and flying up the beach like DIY bubble stuff.

Unlike Oliver, who fell in love at first sight, it has taken me 20 years to appreciate the peculiar beauty of the British seashore.

A friend, who is Brighton born and bred and swims every summer, no matter how appalling the weather, accused me, teasingly, of being a snob when I refused to go in, even during the 2003 heatwave when it was hot enough to fry a full English breakfast, including black pudding, on the sidewalk. Initially, I cited health concerns. The Hepatitis B card trumps almost everything.

Then, once the water quality improved, I used the temperature (which a walrus would consider brisk) as an excuse.

But the truth is, I just didn’t fancy it. After Bermuda’s soft pink beaches, the shore here, with its miles and piles of pebbles, looked as alien as Tatooine. Only with grottier sand.

The surf—the colour of weak tea—was foreign, too.  Even the noise it made was weird—like the roar I once heard when wandering up the King’s Road and Fernando Torres scored (finally!) for Chelsea at Stamford Bridge, a mile away.

Occasionally, in winter, it was nice to shuffle along the esplanade and admire the mother-of-pearl sunsets. From a distance. But venture down to the waterline? Noooo.

Now, though, thanks to Oliver’s pleading eyes and the arrival in town of a madman who has been planting poisoned sausages in the parks, I’m there all the time.

I’m not swimming—I’m not certifiable! But suddenly I realise that perhaps my friend was right. I have been a snob.

Oliver is right, too: you never know what you will find. Sometimes, the tide has pressed pebbles the size of potatoes into dunes so enormous you can’t even see the sea till you’ve scaled the last peak. They are weirdly comfy these stones, believe it or not; if you plunk yourself down on them, they shape themselves round you, so it feels like you’re in the world’s biggest beanbag chair.

Occasionally, the beach is completely flat, as though planed by a giant hand; and there is sand—OK, brown, but sand nevertheless—in a great swathe at the water’s edge.

One evening, I arrived to discover that the sea was missing.  Gone. The spring tide, aided and abetted by the eclipse, had whisked it away, leaving a whole new country—Atlantis under the Pier—exposed and ripe for exploration.

People had come from miles around to marvel, and stroll along the silvery sandbar at sunset.

A few were digging for lugworms, enormous things that live deep below the sand (another thing to worry about). Apart from the fact that they were using flashlights and not gas lamps, it was a scene Dickens would have found familiar.

By the time you read this, Oliver and I will have been banned from the beach. Just as in Bermuda, dogs are not allowed during high season.

And already, I am worried. Like a seaside Lorax, without the luxurious mustachios.  I speak for the beach!

Somebody has to, clearly, because on a warm afternoon last week, with the Atlantic as calm as a millpond, I took Oliver down for his usual constitutional and found a father and his two small sons standing in the shallows skipping stones, while round their ankles bobbed a load of rubbish. Their rubbish.

Further down, near the groyne (don’t snigger—it’s a stone wall designed to stop the beach washing away) was a trail of broken glass from a smashed beer bottle.

Atop another groyne (stop it) two Nordic gods rested next to their paddleboards—blond hair in ponytails; wet suits rolled down to their waists; smoking like chimneys.

On the next stretch of beach, someone had dragged two old mattresses down to the shore. And left them.

It was a profoundly depressing scene. Oliver was bummed because I refused to let him walk back the way we’d come. I was sad because I couldn’t understand how people could be so stupid.

It made me appreciate home, where people—most of them, anyway—recognise that the beach is a thing of beauty, but only a joy forever if we treat it with respect.