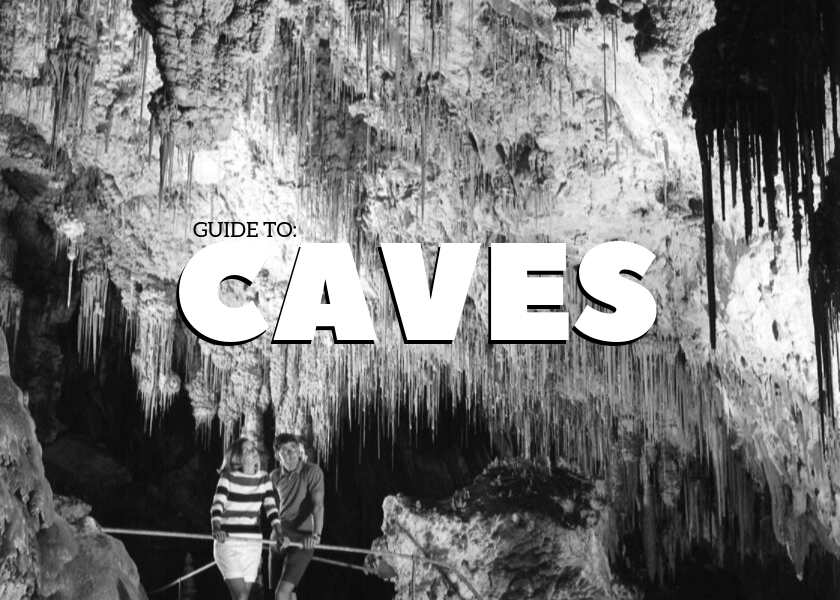 The Bermudian’s Guide to Cave Exploration

Many of us have visited Crystal Caves on numerous occasions but there are many more caves to explore in Bermuda.

What to Bring
A powerful flashlight and a back up. You don’t want to be caught out without a light.
A camera so you can capture your experience.
Sturdy, close-toed shoes are a must when exploring dry caves.
Clothes that you can get dirty. Many caves have red soil that can easily stain your clothes.
A helmet if you’ll be spending time navigating through caves with low ceilings.

Where to Go
Steer clear of the commercial Crystal Cave. This site is a haven for tourists, but it affords no sense of adventure. The cave has been installed with lighting systems, and an accessible walkway. Though these amenities provide easy access to a beautiful subterranean landscape, there is only one route through the cave.

Admiral’s Cave just up the hill is a better option. Named for the admiral that discovered it, this cave used to be a show cave but suffered from vandalism and is difficult to access. Climb down into the pitch dark with a series of ropes and handholds installed by cavegoers over the years.

Walsingham Nature Reserve also contains a great many caves. Causeway Cave is right on the coast, looking out towards the ocean. This little cave is flooded with sea water and is the perfect mini shaded grotto. The ceilings are very low, though.

Subway Cave in the nature reserve is dry, and contains dramatic limestone formations. The stalactites jut down from the top, so a helmet is recommended when exploring this cave. When you descend down, the humidity drops and the air is cooler. However, the ceilings are low, and you may have to crouch or crawl.

Walsingham Cave is the crowned jewel of caves and is one that many swim in, although swimming isn’t advisable as it is harmful to the delicate ecosystem that lives within the cave’s water. 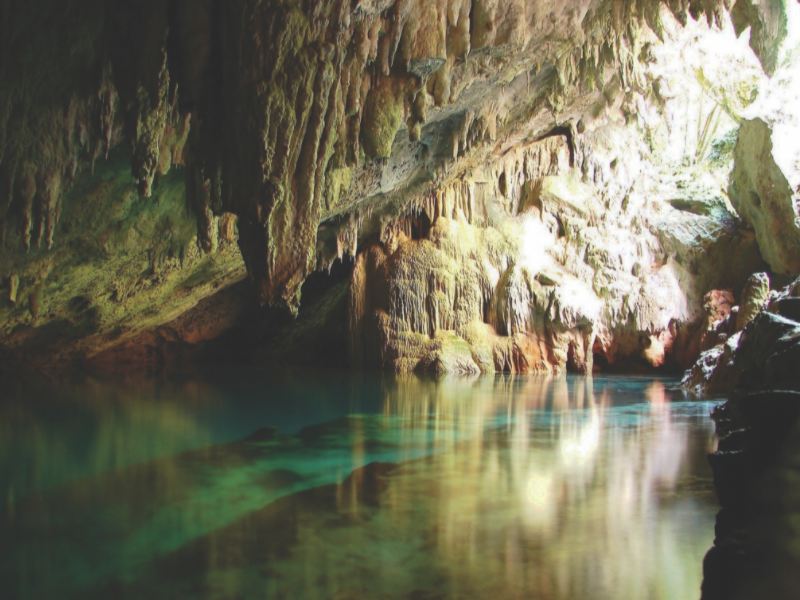 Unfortunately, many caves that were once grand attractions are now no longer accessible to the public. In particular, Church Cave, which has the largest underwater lake of any cave, and Leamington Cave, are both now part of private property.

Cave Geology
Bermuda’s caves were formed about one million years ago during an Ice Age, which meant that sea levels were considerably lower than they are today. At this time, Bermuda’s land mass was about 20 times as large as it is today. The beautiful stalactites, stalagmites and crystals we associate with caves can only be formed with fresh water.

Rainwater, which is slightly acidic, dissolves the calcium carbonate found in limestone over long periods of time. Over thousands of years, small fissures get bigger and eventually become caves. Stalactites are formed when dissolved limestone in rainwater leaves a small deposit on the cave’s roof. Processes of dissolution and evaporation produce different cave forms.

What You Might See
Underground lakes – Bermuda’s caves contain seawater, but they share few features with the ocean around us. Sunless, still, and colder than coastal water, the underground lakes look tranquil and a little foreboding.

Cave waters provide a very stable ecosystem for the animals that live within it, and Bermuda’s caves are a hotspot for biodiversity and endemic species. Many of the unique marine invertebrates that live there can be classified as “living fossils.”

Stalactites and Stalagmites
Stalactites are the cave formations jutting down from the top, while stalagmites are the formations coming up from the bottom. These two structures are twinned, as dissolved limestone from stalactites are what creates stalagmites. Sometimes they meet in the middle to form pillars.
Calcite
Some people refer to this deposit as “crystal”. Calcite comes in a myriad of forms, and are responsible for most of the beautiful formations in caves.
Soda Straws
These are delicate, hollow mineral tubes on the ceilings of caves. They are created when water leaches slowly into the cave.
Curtains
Curtains are formed when calcite forms a wavy or folded sheet on the ceiling of a cave.
Flowstone
Flowstone in a cave looks a bit like a waterfall has been immortalized in rock. Flowstone is formed from actively flowing water rather than water that is squeezed slowly through cracks in a cave.

Unique Biology
Individual caves often contain organisms unique to just that one cave. As such, if one cave is destroyed, entire communities of animals and entire populations of a species can become extinct.

Bermuda’s drowned caves contain at least 84 species of endemic invertebrates. They have adapted to live in our caves over millions of years and cannot survive outside of them. Cave mouths also provide oases for endemic species, especially rare ferns.

Caves also provide opportunities to explore geological and natural history. They are a rare look into Bermuda’s historic limestone deposits. Many of them also contain fossils of species extinct or extirpated in Bermuda.